Be “SMART” with Windows Azure Pack and SMA

So, what exactly is SMA and why is it important in the world of PowerShell?  I’ll start with a link where you can read even more information at your leisure http://aka.ms/IntroToSMA.  This link starts off with the basics and then introduces you to some of the concepts.  However, to give you a general idea, SMA is an automation engine that ships with System Center Orchestrator that is leveraged by the Windows Azure Pack (WAP) built entirely on Windows PowerShell Workflow. Think a Silverlight UI that looks like Azure with PowerShell Workflow under the hood leveraged for automation of that solution. 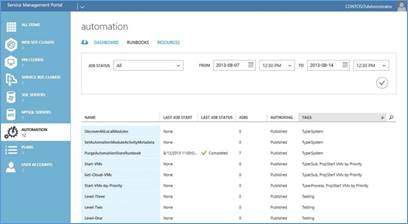 Now that we’ve gotten the formalities out of the way, I wanted to dive into some specifics around a new solution I put together for SMA that will streamline the process of sharing PowerShell Workflows (SMA Runbooks).  True, this solution directly leverages SMA, so in order to really appreciate it, you’ll need to dive into the intro above and get your hands on the solution.  However, it may pique your interest enough to investigate it a bit and see the power of the solution [then I’ve done my job too J – after all I want you to do more than just read about it – “kick the tires” and let me know what you think]. You can read in depth about it here: Automation–Service Management Automation–SMA Runbook Toolkit Spotlight–SMART for Runbook Import and Export but I’m also going to give you the basic details in summary within this article so please read on!

The SMART for Runbook Import and Export comes with a series of PowerShell scripts, XML files (atomic SMA Runbooks), and a User Guide to get you started.

In closing, I want to thank you for checking out this article and providing any feedback or comments to the solution I’ve covered here.  I definitely recommend taking a closer look at the following supporting blog post that also provides the direct download for this PowerShell-based solution.  Automation–Service Management Automation–SMA Runbook Toolkit Spotlight–SMART for Runbook Import and Export and Happy Automating! J