Some time ago I stumbled upon the Pester framework that promised I would be able to test my scripts. This seemed to be super-useful for my day-to-day scripting, but unfortunately the learning curve was a bit steeper than I thought it would be. It took me reading a book on Test-Driven-Development (TDD) to understand what the ideas behind Pester are, and that they are actually pretty simple. Armed with this knowledge I was finally able to put Pester in use, and found it useful through the whole life cycle of my scripts. To help you with the first steps, I wrote a short series of articles that describe the basics of Pester.

Pester is a unit testing framework for PowerShell. It provides a few simple-to-use keywords that let you create tests for your scripts. Pester implements a test drive to isolate your test files, and it can replace almost any command in PowerShell with your own implementation. This makes it great for both black-box and white-box testing. Pester is best used with TDD approach to development.

For those of you who are not familiar with TDD, let me sum it up briefly: TDD is the opposite of the traditional approach to development. Traditionally you write your functional code first and then you write tests for it. You are progressing from implementation (how the code is written) to specification (how it should work). TDD is turning this around, so you progress from specification to implementation. First you define how the code should work and then you write the code. This is a pretty powerful concept.

In TDD you write the specification in the form of tests. Before you add any new feature you write a set of tests for it. You run your test suite and make sure all the new tests fail. This shows that there is a feature missing. You then develop the feature, testing it frequently. Once all your tests (including the new ones) pass you know the new feature is finished. You also know you did not break anything else while adding it.

Do this for every feature, patch or any other change and you are always one test suite run from seeing if everything works as requested. That is the biggest benefit of TDD.

Pester brings these benefits to PowerShell and that is why I love using it.

Pester is a PowerShell module authored by Scott Muc and improved by the community. It’s available for free on GitHub and installation is pretty easy. You just download it, extract it to your Modules folder, and then import it to your PowerShell session.

Let’s start by downloading it from the GitHub and extracting the archive into your Modules directory: 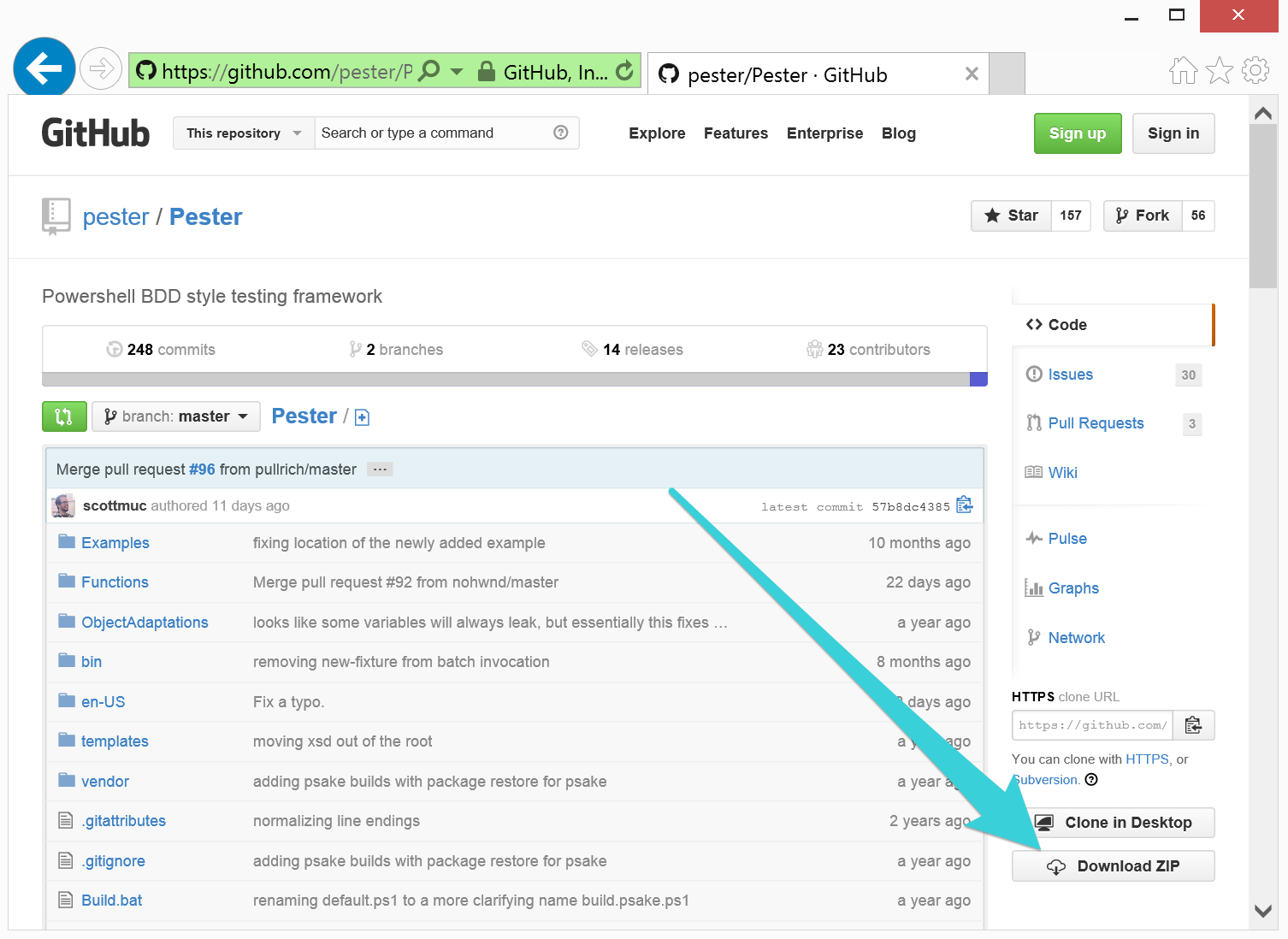 If you used Internet Explorer to download the archive, you need to unblock the archive before extraction, otherwise PowerShell will complain when you import the module. If you are using PowerShell 3.0 or newer you can use the Unblock-File cmdlet to do that:

If you are using an older version of PowerShell you will have to unblock the file manually. Go to your Downloads folder and right-click Pester-master.zip. On the general tab click Unblock and then click OK to close the dialog. 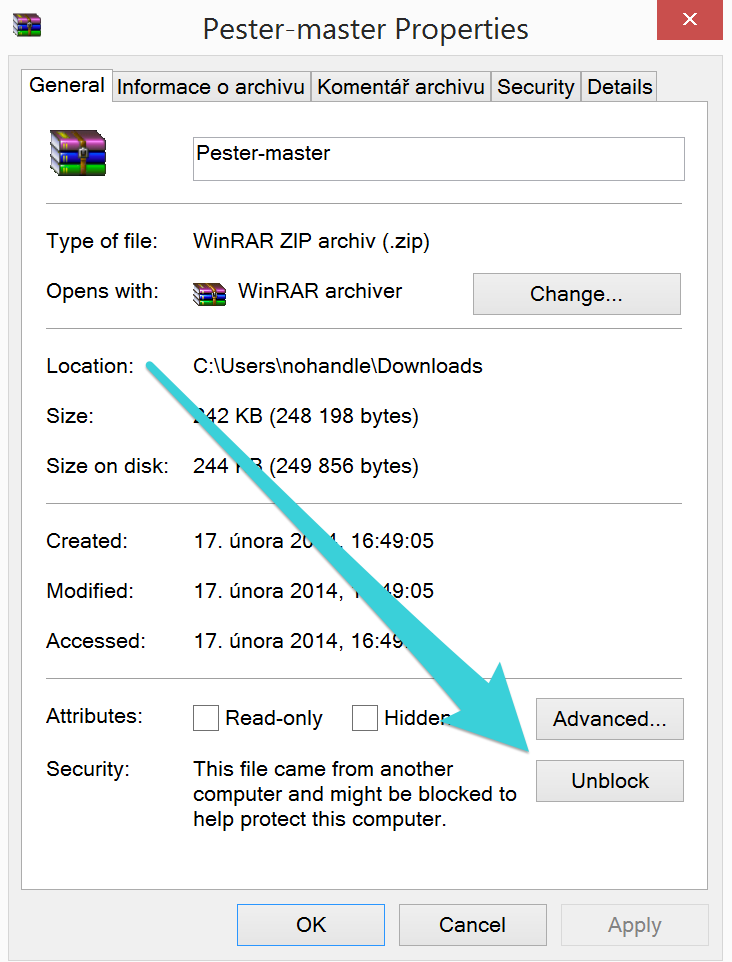 Open your Modules directory and create a new folder called Pester. You can use this script to open the correct folder effortlessly:

Extract the archive to the Pester folder. When you are done you should have all these files in your Pester directory: 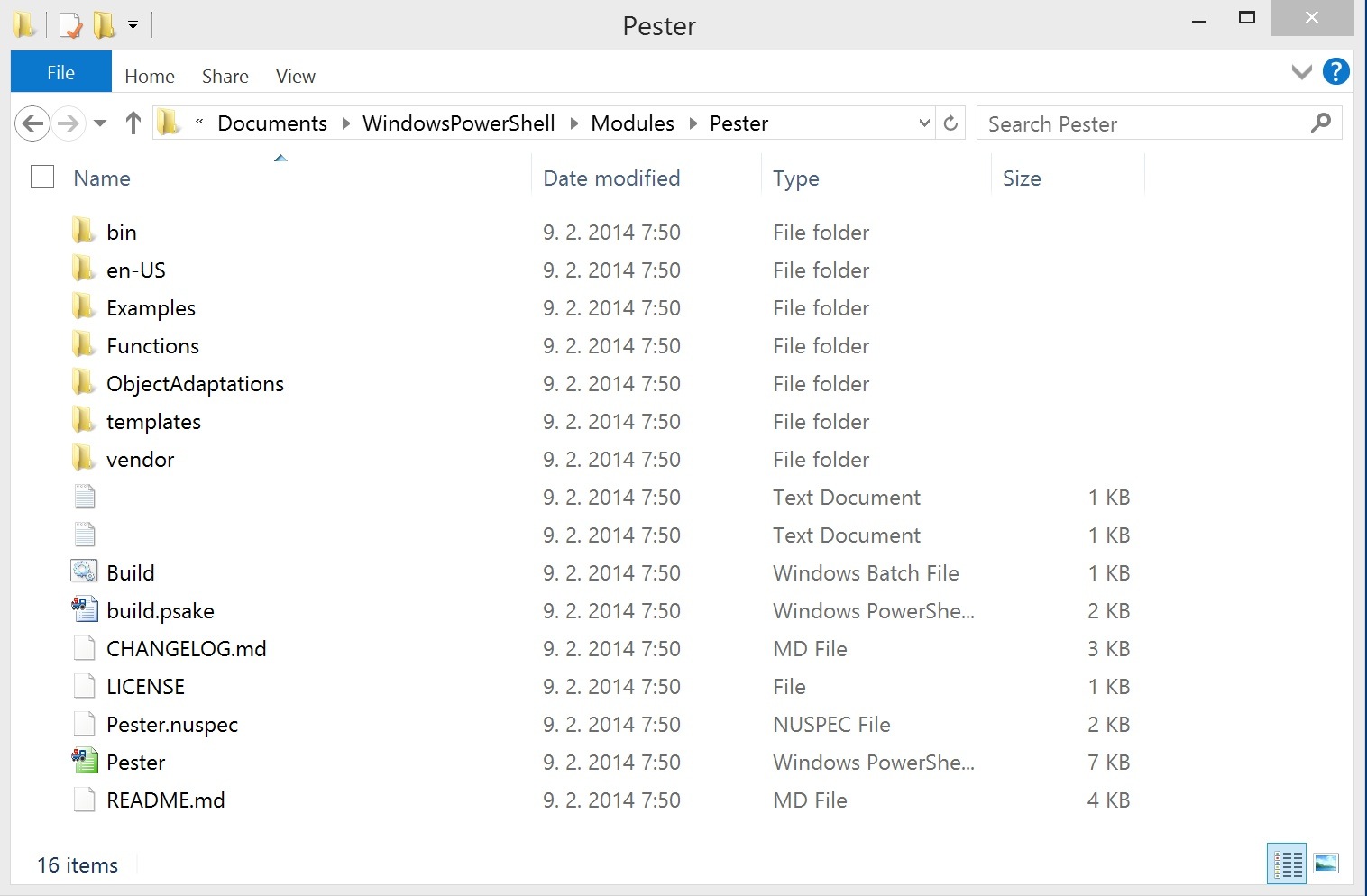 Start a new PowerShell session and import the Pester module using the commands below:

Next you will need a folder to play with. On my computer I created ‘C:\Pester’ for this purpose and you should do the same. If you choose another working directory, make sure you change the paths in the examples accordingly.

Creating and failing our first test

If you got this far I am sure you can’t wait to start testing. For the first example we’ll start with something extremely simple and create a function called Get-HelloWorld. The function will output a ‘Hello world!’ string when invoked and nothing more.

But before we start writing any code we should have a test in place. Creating a new test in Pester is easy. It contains a utility function New-Fixture to create the basic “scaffolding” for a test. Optionally it can create a separate folder to keep our working folder well-organized.

Nothing surprising except an empty function definition.

The content of the Get-HelloWorld.Tests.ps1 file is way more interesting, a default test is waiting there:

Before explaining how everything works, let’s do some testing first. First you need to change the test to reflect what the Get-HelloWorld function should do. Take the whole content of the tests file and replace it with this:

Now it is time to run the test and see if it passes. To do so, you will use another Pester function called Invoke-Pester. By default,Invoke-Pester runs all the tests in all the files in the current directory and its sub- directories, and that is exactly what we need:

The output is red, and red means that the test failed. Don’t worry, remember what I said about TDD, you should always start with a failing test. Before we move on to implementing the function we should confirm the test failed for the right reason. In this case we are testing for specific output but the Get-HelloWorld returns nothing. Personally I would expect a message saying that there was no output but output was expected. And fortunately that is what the error message says:“Expected: {Hello world!}, But was {}”. The test fails correctly and we can finally implement the funciton. Open the Get-HelloWorld.ps1 file and replace the empty definition with this:

Make sure you saved the file and run the test again:

The tests passed this time and that means the function is working! Congratulations, you just created, failed and passed your first Pester test!

Let’s start over and explain what actually happened step-by-step.

First you took the default test and replaced it with another one. Two things were different in these tests. The description of the It block and the code in the It block.

In Pester the It block represents one test. The description of the It block sums up what is tested, and the code inside the script block determines whether the test passes or fails. If you’d keep the script block empty the test would always pass. Such test is useless so you need a way to make the test pass or fail depending on a given condition. To do that Pester implements a set of keywords called assertions.

The assertion used in the default and the new test is Should Be. This assertion takes input from the pipeline and compares it with the expected value. You provide that value after the Should Be keywords. In the default test the $true is compared to $false and such test always fails.

Rest of the tests file

In the tests file there are few more things worth noticing. As you can see the It block is placed inside a Describe block. The Describe block represents a group of tests and helps you keep your test file well-organized. It may seem useless now but it will prove more useful as your tests suite will grow. You can change the description of the Describe to whatever you like, but do not remove the Describe block entirely. Every tests file has to have at least one.

The Describe keyword, has more to it than grouping your tests. You use it to separate scopes for TestDrive, Mock and you can even use its description to run a set of tests. All these capabilities will be covered later. Now it is enough to remember that every test file has to have at least one Describe block and that the It blocks are placed inside the Describe block.

The last thing in the tests file we did not cover are the top three lines of it. These lines link your tests file to your production code file. That is why the Get-HelloWorld function can be used in your tests file even though it is defined elsewhere.

This covers the basics of testing with Pester. In the next article we will take a detailed look on more Pester keywords and all the assertions available. Using TestDrive and Mock will follow. If you found this article interesting, you missed something, or you disagree, please share your opinion in the comment section.