Writing a PowerShell module in C#, Part 1: The basics

In this series we will cover the basics of building a Windows PowerShell binary module using C#. In the first part of the series we will build a module with just one cmdlet called Get-Salutation that will resemble the traditional “Hello World” example.

Open Visual Studio and create a new project from the File menu:

Select the Visual C# from the installed Templates list and then pick Class Library since compiled modules in PowerShell are in DLL format:

We give it a name and specify a location for our project. For the purpose of this tutorial I will name my project MyModule.

Next step is to set the project’s minimum target .NET Framework depending on the lowest version of PowerShell we want to support. You can use as a reference: 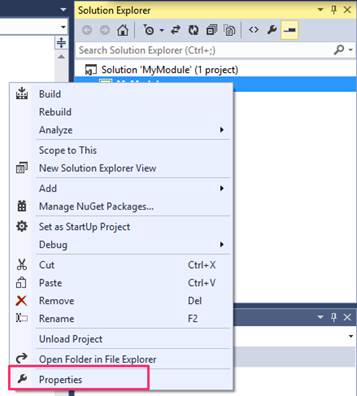 Now, on the Application tab we select the target framework from the dropdown list. 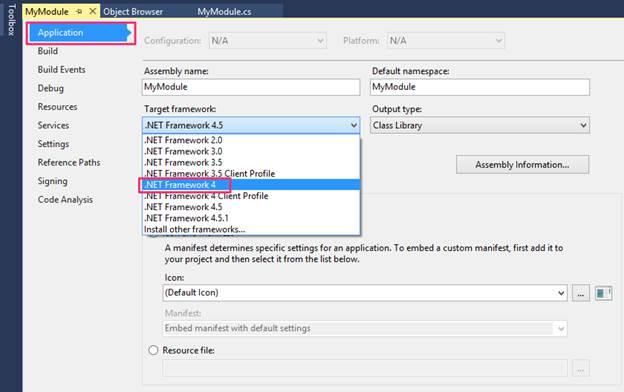 For this example project we use a PowerShell 3.0 assembly and we want to support that as the lowest version of PowerShell. That’s why we select .NET Framework 4. We will be asked to confirm the change and it will re-open the project.

We need to load the System.Management.Automation library as a reference to our project to make the PowerShell API calls available. To do this we right click on Reference in the Solution Explorer and select Add Reference

Now navigate to C:\Program Files (x86)\Reference Assemblies\Microsoft\WindowsPowerShell\3.0 This folder is created with the installation of Visual Studio 2013. There we select the System.Management.Automation.dll to add it to our references.

Once we have the reference assembly in our project we can now use the assembly to get access to the API calls we need to build a PowerShell module. We start by adding System.Management.Automation to the default list that Class template has provided.

Those familiar with PowerShell advanced functions will notice that process for creating a cmdlet in C#  is very similar. The major difference is that a module with advanced functions is stored in a .psm1 file and cmdlets are stored in a DLL file. The attributes are used even in the same manner so for a person that has written script modules in PowerShell going to C# is very easy.

Let’s start by applying the attribute to the default class created in our namespace. You will see that in the case of C# we have to define the verb and the noun for the cmdlet. Thankfully, Visual Studio supports the IntelliSense for the verb group and the verbs inside the group.

After selecting a verb, we need to add the second parameter to the attribute–the noun we want to use (in our case a noun is Salutation). The verb and noun combination we use in the attribute is how the cmdlet will be named in PowerShell. The class name has no impact. As you can see it the following screenshot, if we place a comma after the second parameter, IntelliSense will suggest other named parameters we can use when defining the cmdlet.

One thing we have to make sure of is that the class inherits from the PSCmdlet class. This is done by adding : PSCmdlet at the end of the class name.

I like naming my classes in Pascal case following Microsoft naming guidelines http://msdn.microsoft.com/en-us/library/4xhs4564(v=vs.71).aspx to easily identify them when working inside of Microsoft Visual Studio.

The syntax is almost identical to PowerShell. We apply the attributes to the public property and its name becomes the name of the parameter. For more information on using properties check http://msdn.microsoft.com/en-us/library/w86s7x04.aspx

A PowerShell function can have the following named script blocks:

When we write a cmdlet in C# we accomplish the same using the following methods:

Each of the methods is inherited from the PSCmdlet class so we need to use the protected and override modifiers.

The list of all supported methods is available at http://msdn.microsoft.com/en-us/library/system.management.automation.cmdlet_methods(v=vs.85).aspx . Since we are building a super simple module just to show the basic concepts we only need the ProcessRecord() method (we won’t need to initialize any data or finalize any action or actions at the end of execution). Also, we’ll use the WriteVerbose() method to write verbose information if requested. In an advanced function this would be the equivalent of using the Write-Verbose __cmdlet. Next, a string object is created and returned to pipeline using the WriteObject() method. This is equivalent to placing a variable containing an object or collection of objects on its own in the body of an advanced function so it would be send down the pipeline.

Now we just need to build the solution by pressing F7 or selecting Build Solution from the BUILD menu.  In the Output pane of Visual Studio we should see that it builds successfully and provides us a path to the generated DLL.

To test the module we open a PowerShell session, navigate to where the DLL is and use the Import-Module cmdlet with the -Verbose parameter to see if it loads our cmdlet.

If we use the Get-Help cmdlet against Get-Salutation we should see the Name parameter and the proper information for it.

Let’s test the cmdlet directly and from the pipeline to make sure it works like it should. First, we test giving it several values to the parameter, then a collection of strings from the pipeline and at the end, an object with property that matches one of the aliases.

In the next part we will look at setting up debugging for the module inside of Visual Studio 2013.

If you are interested in more advanced examples for PowerShell 3.0 and 4.0 take a look at the sample pack in MSDN http://code.msdn.microsoft.com/Windows-PowerShell-30-SDK-9a34641d