While we worked on Windows 8.1 deployment, we were required to make multiple keyboard layouts available on the Windows logon screen. All our computers came pre-staged with standardized corporate image, so we were not able to put these settings directly into the image. The only possible solution seemed to be using the Control panel > Region and Language Settings > Administrative > Copy settings… 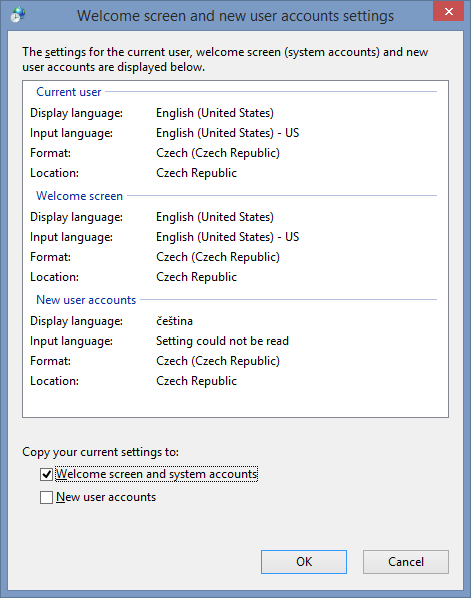 But that would require clicking through the GUI on every staged computer and I needed a way to automate it. I used ProcessMonitor.exe to see what is happening when I click the OK button in the dialog, but unfortunately that did not help.

I needed a different idea, so I started thinking: The logon screen is in fact LogonUI.exe that is running in the context of the System account. I searched the web and found that the settings for normal user are located in: HKEY_CURRENT_USER\Keyboard Layout\Preload. And mine looked like this:

Current user hive of the _SYSTEM _account is HKEY_USERS.DEFAULT and luckily Keyboard Layout\Preload key was there. I copied my settings there and restarted the station, hoping for the best.

When the station booted back to the logon screen, the correct keyboard layouts were available there, so this approach should work. Copying the Registry values from one place to another might work but I wanted something more intuitive and flexible.

The International module, introduced in Windows 8 and Windows Server 2012, provides *-WinUserLanguageList cmdlets to manage the keyboard layouts of the current user and I wanted my function to integrate with them nicely.

The Set-WinUserLanguageList prompts for confirmation and also warns you if some of the provided languages were invalid and I wanted that behavior too, so this is the function I ended up with:

The function requires Windows 8.1 (or Windows 8) and the elevated privileges to run successfully.

At this point one last catch reminded. During the post-deployment tasks the script is executed under the SYSTEM account. So getting the list of languages using the Get-WinUserLanguageList would only re-apply the settings that were already in place. I had to build the list myself and at first I used the following code:

But then I realized I was making it more complicated than it had to be and used just: