An overview of new features added since the May 2014 Preview is listed in the announcement on the Windows PowerShell Team blog, while additional details are available in the release notes.

There are also some new features not mentioned in the release notes, which we will look at in this article.

This feature allows us to edit remote files via PowerShell remoting from the PowerShell ISE.

To use Remote File Editing, open a new PSSession using Enter-PSSession and type PSEdit <path to a file>. Here is an example:

We can see that the file we’re editing is actually temporary stored in the local AppData folder:

Looking at the contents of the PSEdit function, we can see that the file content is retrieved in byte format before it’s brought back and forth between the local ISE session and the remote PS session: 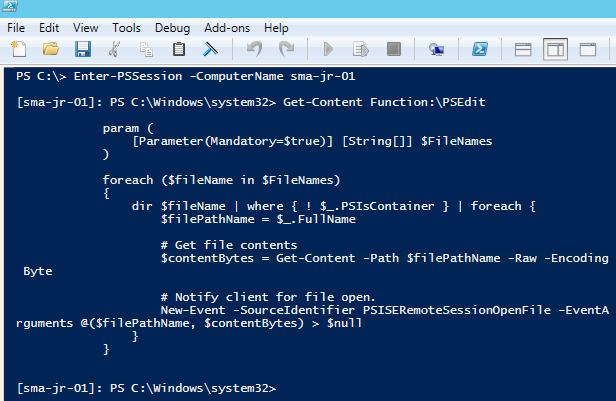 This can be a very useful feature for working with remote files, especially against Server Core.

A new –ThrottleLimit parameter is introduced for 10 commands in the PSDesiredStatedConfiguration module:

This parameter enables control over how many nodes to process concurrently; a very useful feature when working with a large number of DSC clients.

Historically the Start-Transcript cmdlet has been supported in the PowerShell Console Host only. If you try to use it in a PowerShell ISE version prior to “5.0 Preview September 2014” you will be presented with the message “This host does not support transcription”.

Major performance improvements for working with COM objects is introduced in this release. PowerShell team member Lee Holmes has published a video demonstrating the improvement.