The goal of this article is to provide a more detailed step by step way of achieving what was recently presented in How to use WDS to PXE Boot a Nano Server VHD post on Nano Server team blog.

Let’s have a look at the requirements to go through these steps. I’ll actually assume that:

Let’s quickly summarize what steps are required to be able to deploy a Nano.vhd from WDS after a PXE boot:

Prepare the Internal switch on Hyper-V and assign it a static IP address. 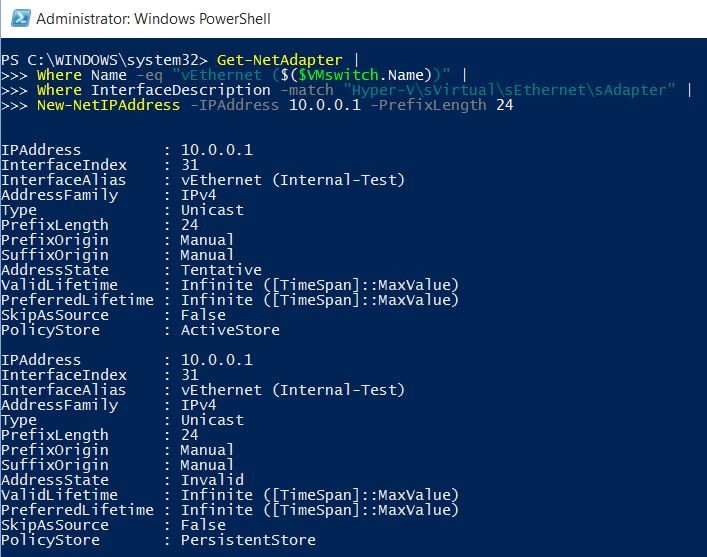 I’ve downloaded the required ISO into the Downloads folder of the logged on user. I’ll store it as a variable to be able to use it later on.

NB: The path is expanded and there’s no check whether the file exists or not.

Let’s make sure that the integrity of the file is fine.

Let’s also prepare a Nano.vhd file that will be copied to the DC1 disk and proposed as an installation image by the PXE server.

To create this Nano.vhd file, you can either follow the Getting Started with Nano Server guide, or you can use the new PowerShell Script to build your Nano Server Image. I’ll use the latter. 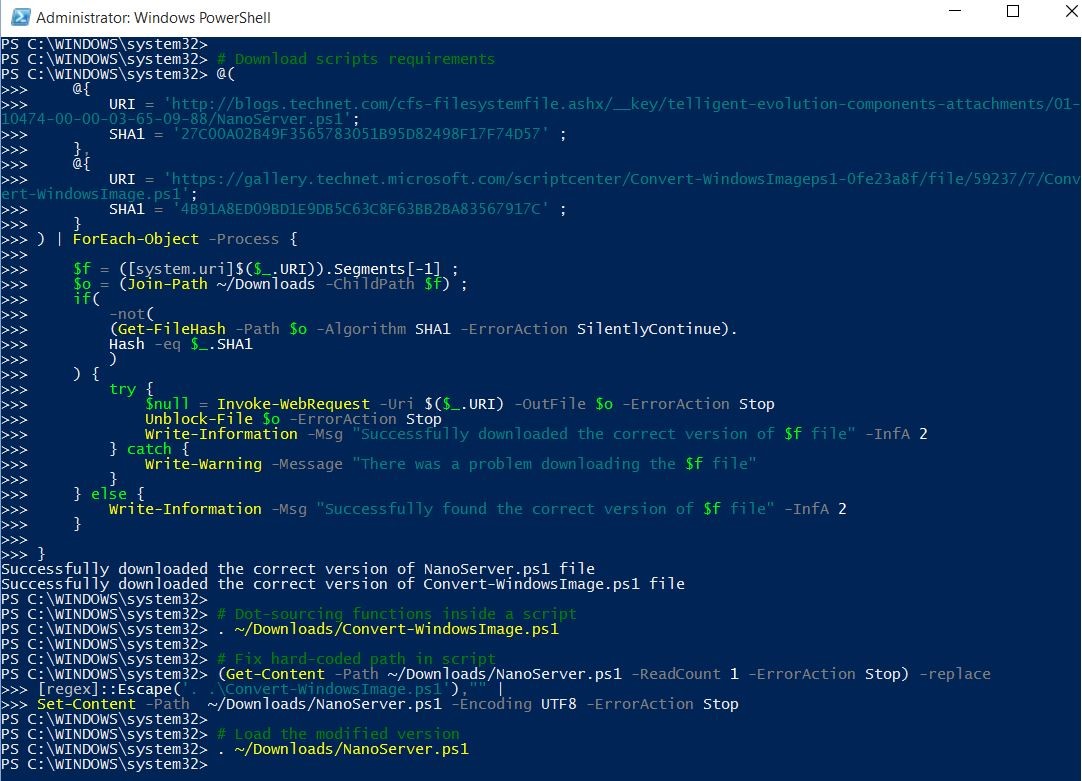 To provision the Domain Controller, I’ll use 3 techniques: the post-installation script setupcomplete.cmd that runs at the end of the specialize phase, the unattend.xml file, and PowerShell Desired Configuration to achieve the equivalent of a DCPromo. The main idea here is to move all artifacts (DSC modules, boot.wim, the prepared nano.vhd file…) required for configuring both the Domain Controller and WDS (Windows Deployment Services) into the VHD of the domain controller. 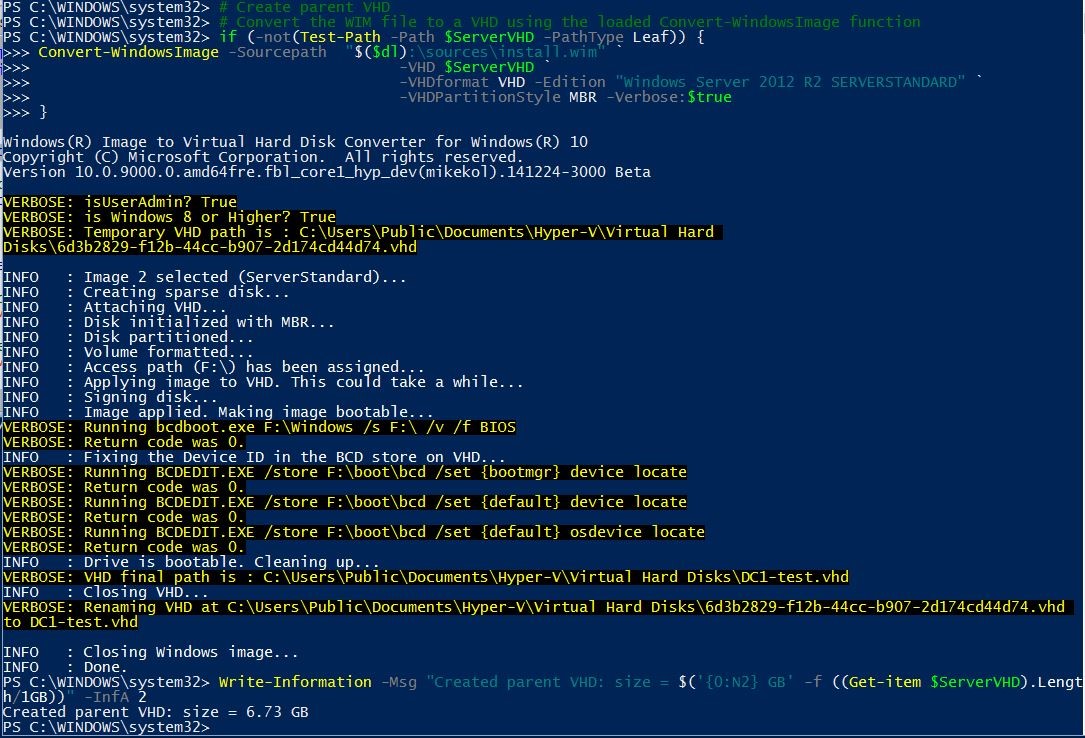 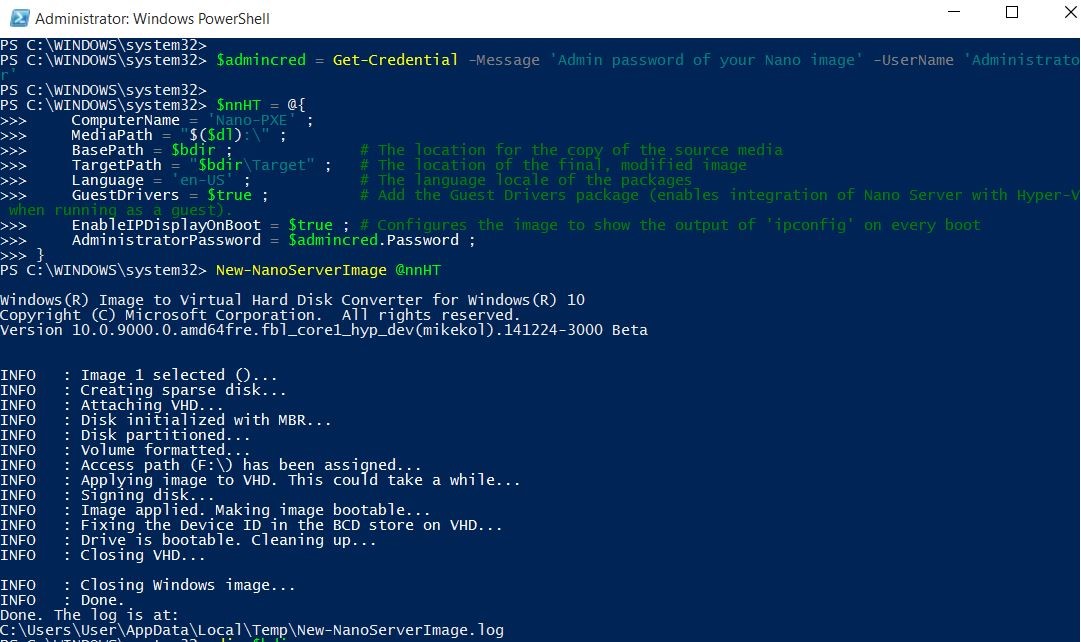 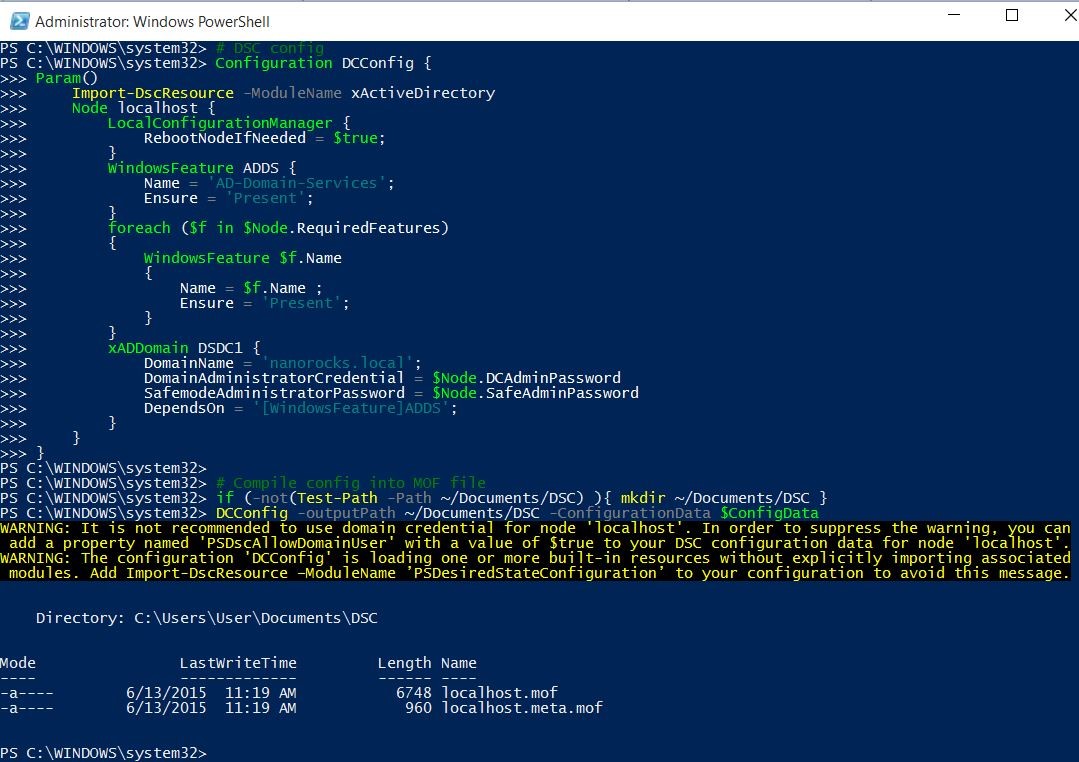 After a few minutes, the operating system of the Domain Controller is ready. 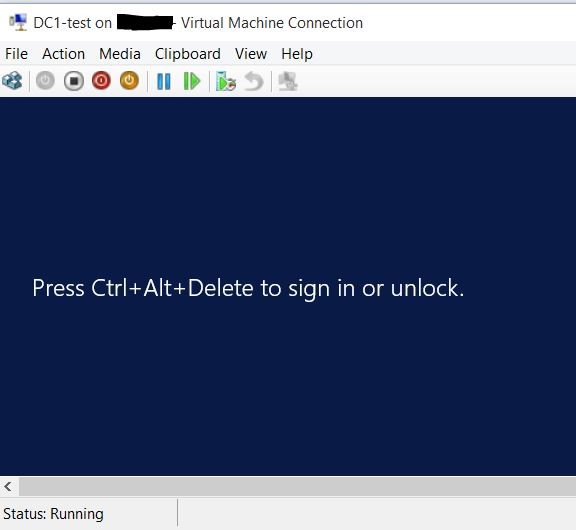 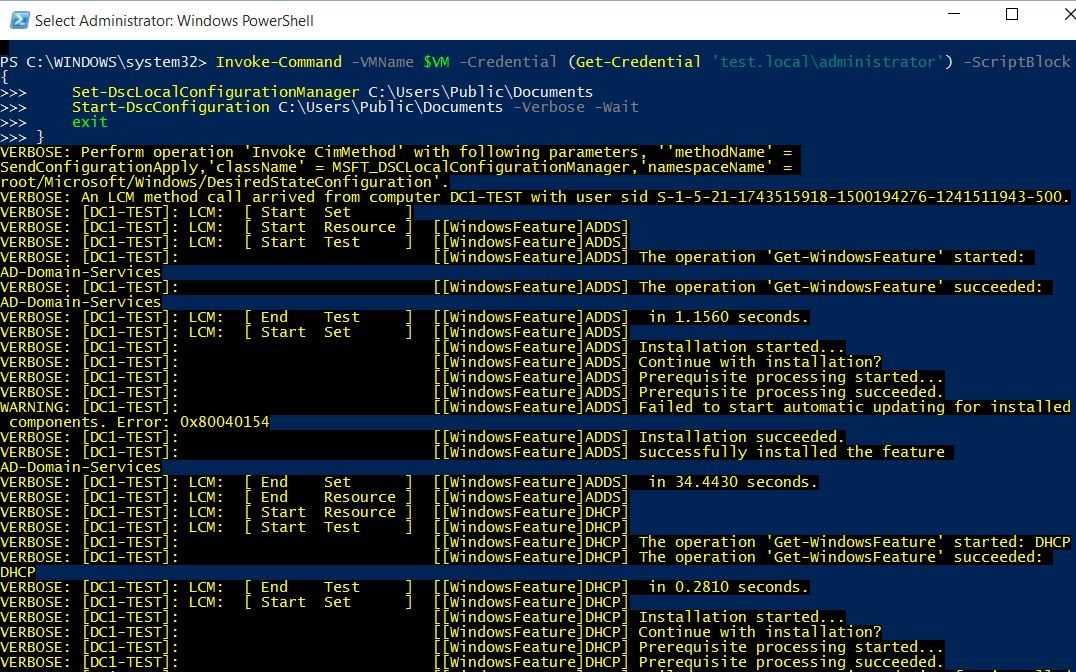 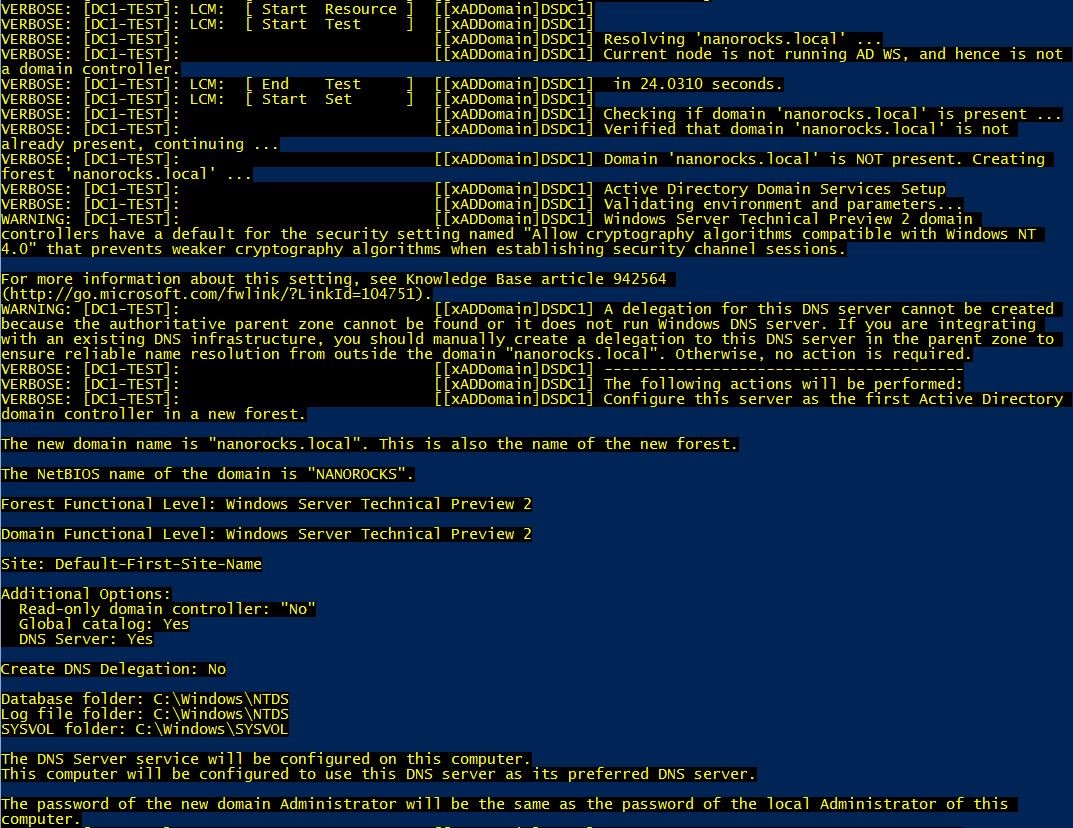 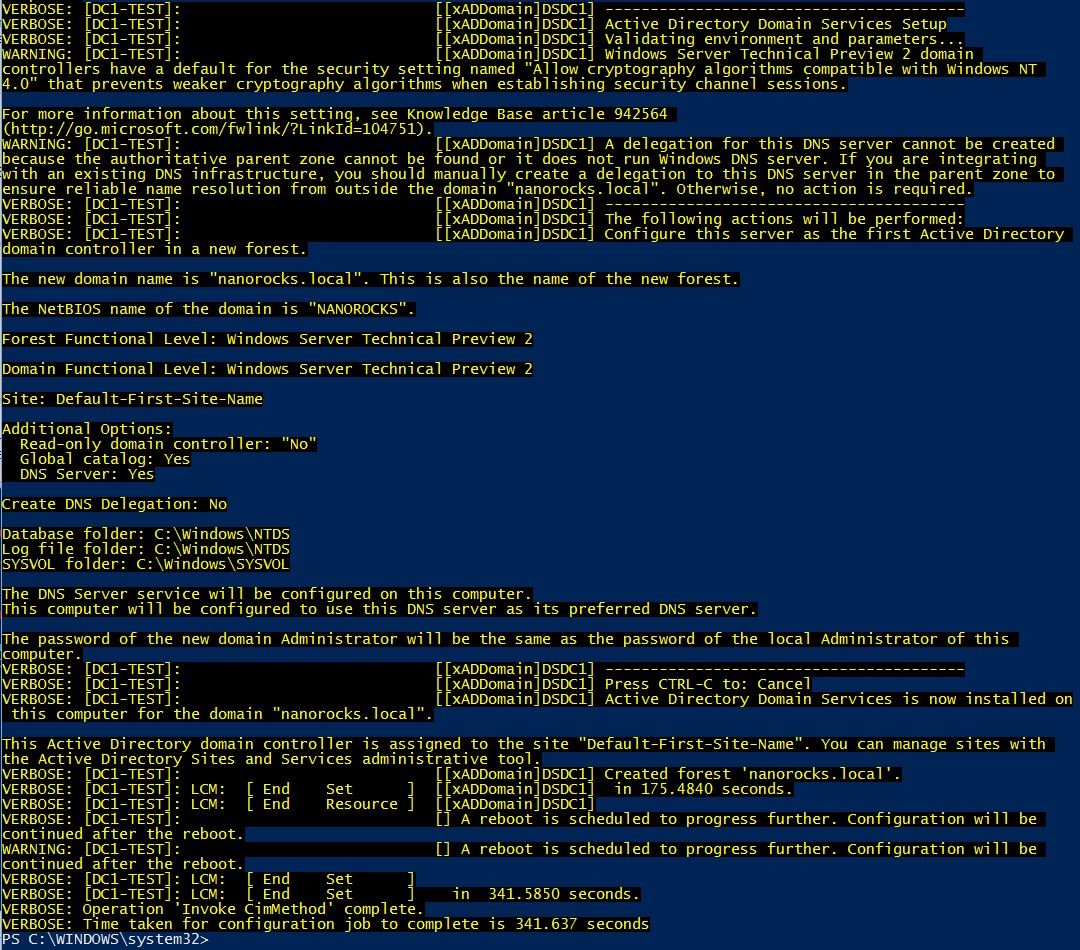 As I’m on a Windows 10 Hyper-V, I can leverage PowerShell Direct recently introduced, so that I don’t rely on the network stack. 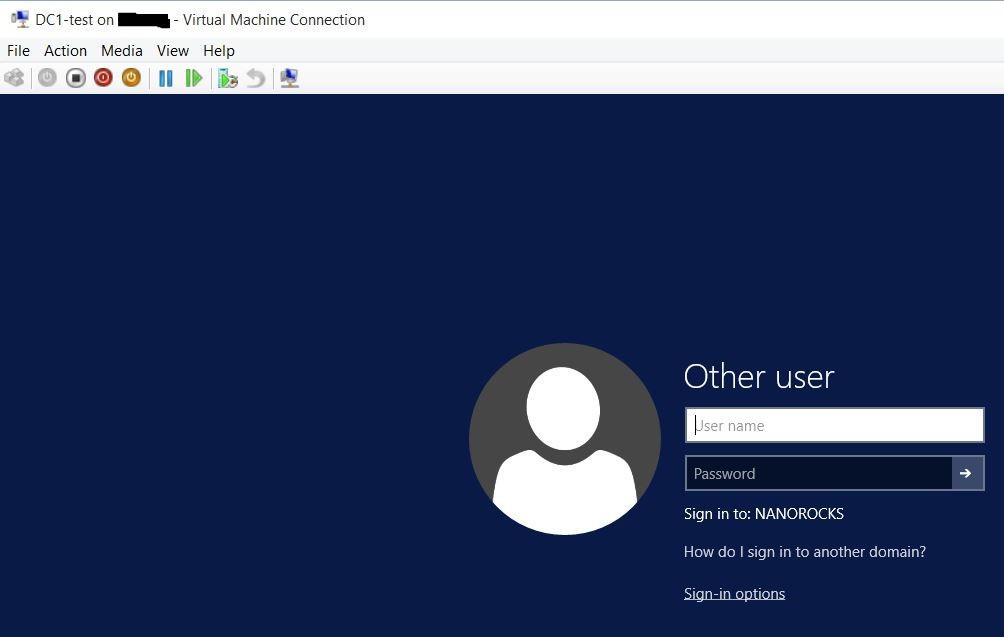 Once the DC has rebooted, I can start configuring the features I provisioned:

Let’s now create a new VM. To be able to boot over PXE on a Generation 1 virtual machine its network adapter should be a legacy network card. 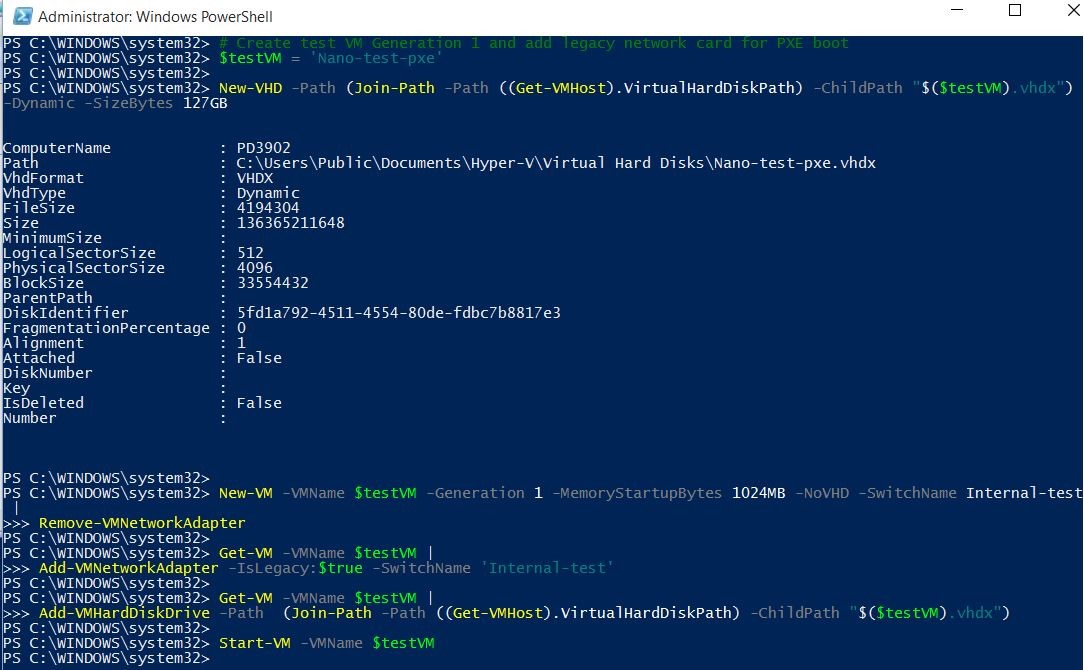 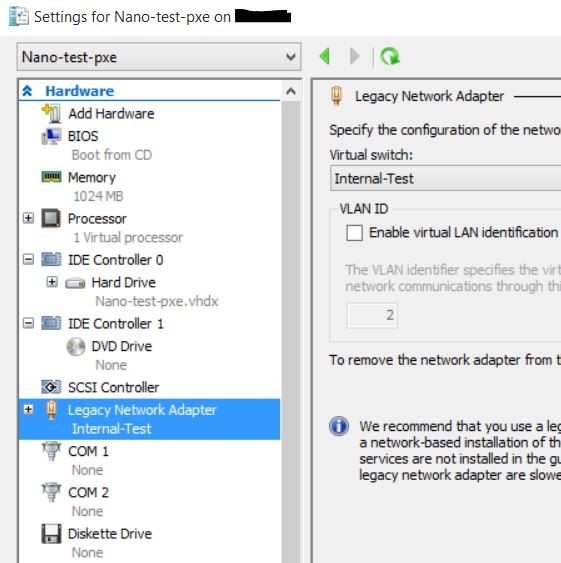 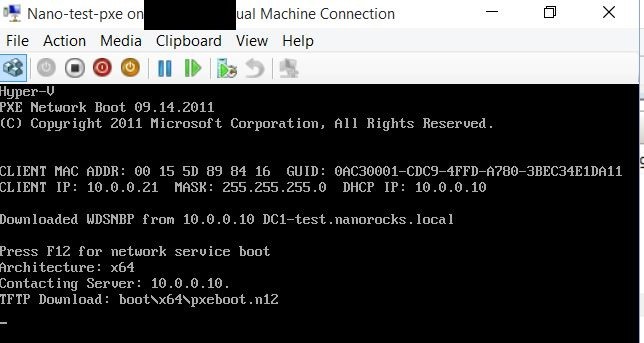 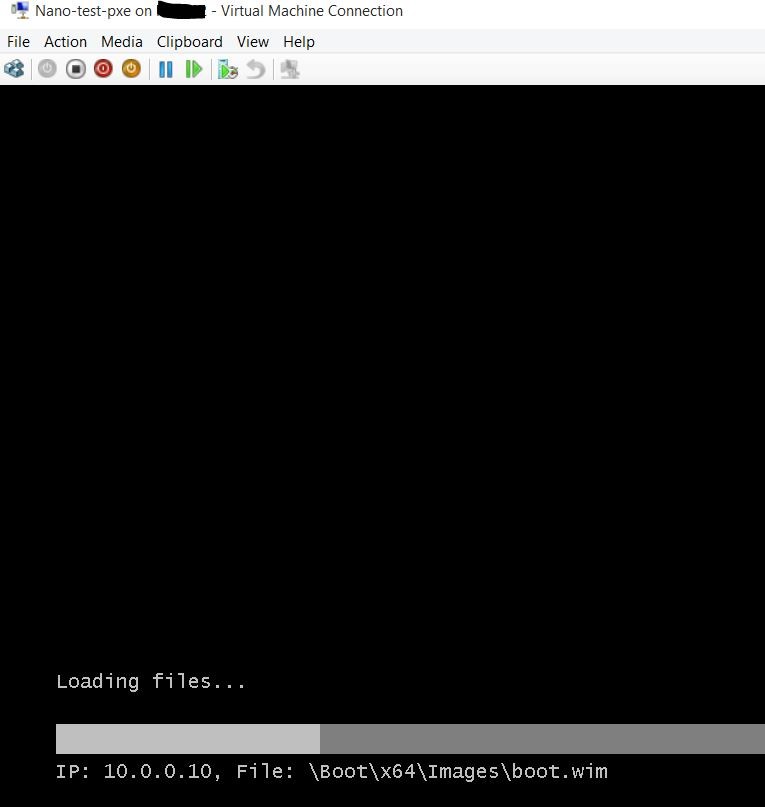 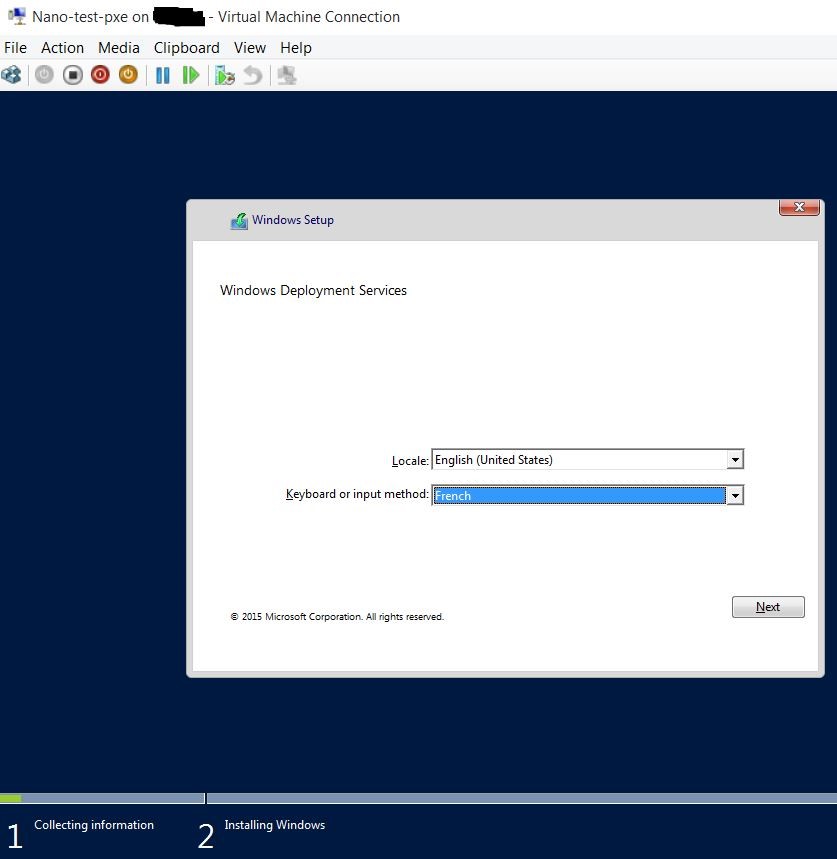 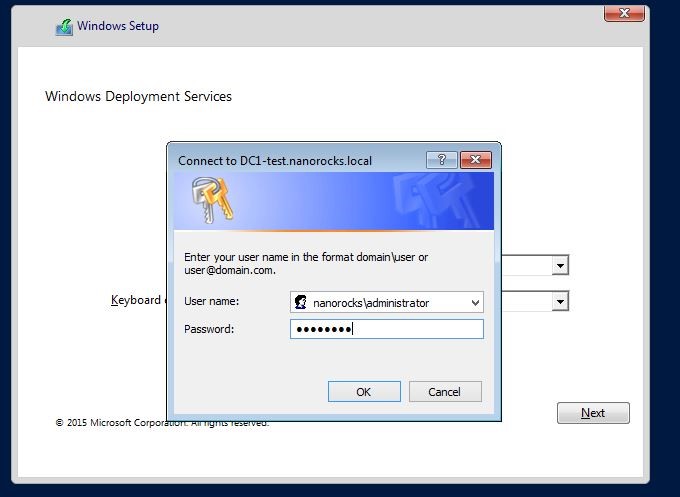 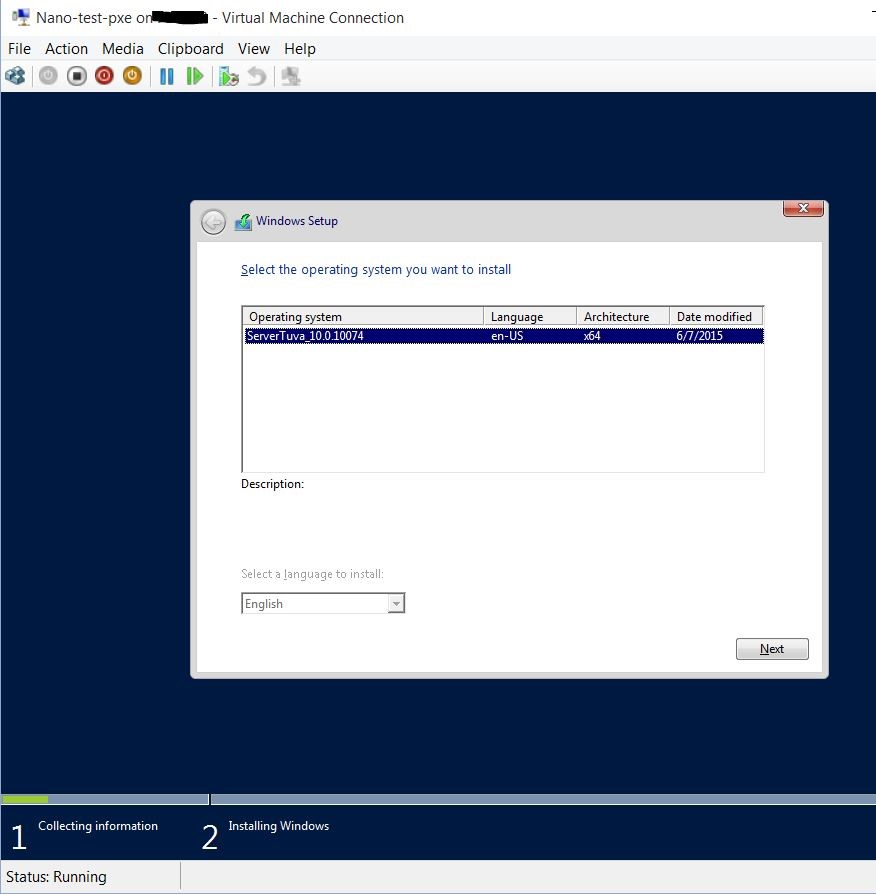 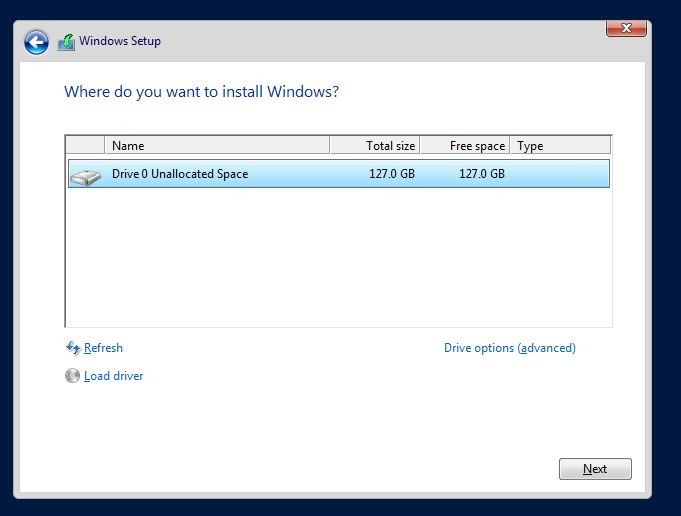 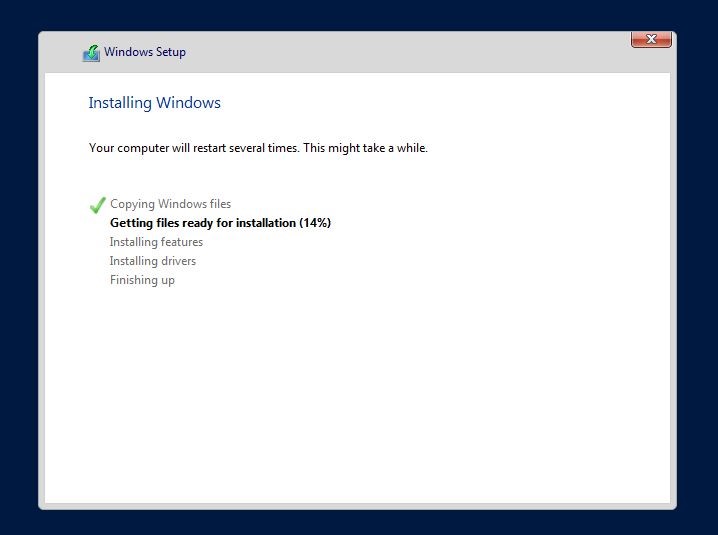 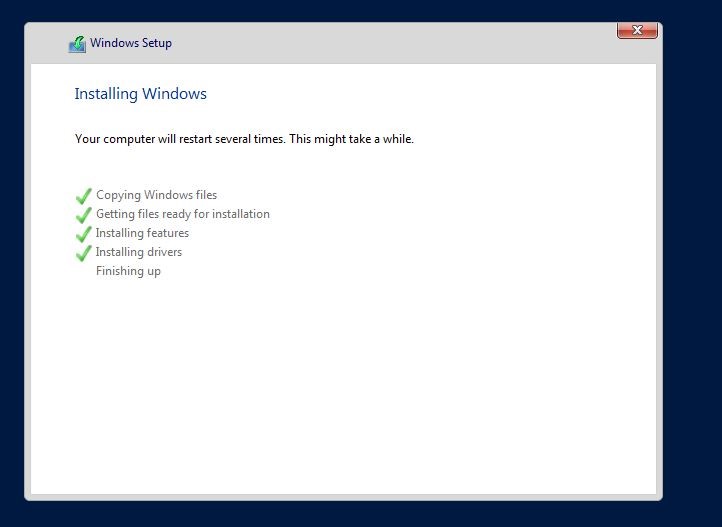 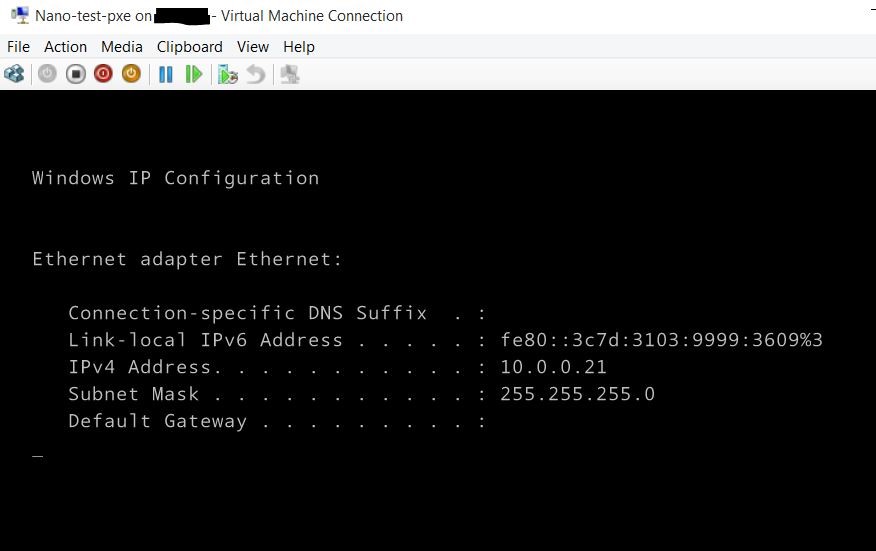