In the [previous post][1] you have seen that there is no DSC resource yet to deploy Windows Azure Pack VM Roles with. Also you have seen that using the Azure PowerShell module still leaves some blank spots which makes it a bit difficult to use. The dependency on the publish settings file is another factor which make the use of Azure PowerShell module not the ideal solution for every scenario.

In this article we take a look at VM Role deployment using my PowerShell module which should be making all this a bit easier.

Run the following code on all the servers hosting the Tenant Public API:

The change is effective immediately, no need to restart IIS or anything.

The Tenant API works out of the box with bearer tokens, so no need to change configurations.

From my experience, some permissions are missing in the Azure Pack Store database for the Tenant Public API to function correctly under Hybrid mode. Specifically means to check on invalidated user tokens. To fix this, run the following TSQL code against the database:

As I wrote in the previous article, the module discussed here can be downloaded from GitHub or from the PowerShell gallery, if you have WMF5 installed, by running Install-Module WAPTenantPublicAPI.

This article focuses on getting you familiar with the module. In the next article I will highlight some code used in this module.  First have a look at an example script which uses the functions from this module and go from there.

First you acquire the token by authenticating against either the Windows Azure Pack authentication website or ADFS (use the –ADFS switch in this case) using the Get-WAPToken function.

This function will populate some variables (Token and Headers) defined in the module level so other functions can now access the data. The Headers variable will contain a hash table once successfully authenticated.

These headers are used with each subsequent function which target the API. It tells the API:

Next we “connect” with Windows Azure Pack using the Connect-WAPAPI function.

This function actually just checks if we can successfully access the subscription URL using the headers and bearer token. When this is the case, some module-scoped variables will be populated with data (PublicTenantAPIUrl, Port, and IgnoreSSL). Subsequent functions will check if these variables are $null or have data before executing the code intended. If $null, an exception will be thrown telling you to first “connect”.

Just like the Azure PowerShell module, the subscription is the basis for operations in this module. We get a specific subscription (Get-WAPSubscription) and make it the current one by piping it to Select-WAPSubscription. This will populate the last module-scoped variable, Subscription.  Now everything is in place to interact with the API.

A subscription is bound to a plan. VM Roles come as gallery items and are assigned to a subscription via the plan or via add-ons. To know which VM Roles are available to us, we need to interrogate the API. We do this with the Get-WAPGalleryVMRole function. Once we know which one we want to deploy, we specifically look it up by specifying the name and, if multiple versions are available, by version. The resulting object is stored in a variable as it contains most of the info we need to generate the required JSON for the resource definition.

The tags used to lookup the Operating System disks are part of the view definition which was acquired by getting the VM Role gallery item. 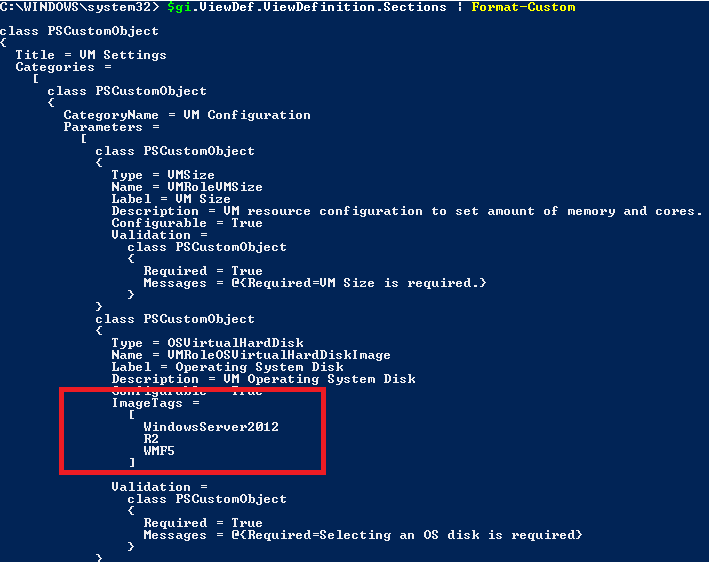 Therefore, the gallery item object is passed to the Get-WAPVMRoleOSDisk function. On the right hand side of the pipeline we sort the resulting objects based on their AddedTime property and select the first one effectively selecting the latest one. The output is captured in a variable as it contains some info we need to generate the JSON for the resource definition later on.

Next we find out what networks are available for our VM Role deployment using the Get-WAPVMNetwork function. VM Networks are assigned to a subscription on the plan or add-on level by the Azure Pack Admin. Besides this, a tenant is able to create VM Networks themselves. The output is again stored in a variable as we need it in the next phase.

Most of what you have seen until now can all be achieved by using the Azure module itself. The biggest difference being the VM Role gallery item with its properties. The API provides you all that you need to construct the correct JSON for the resource definition but the Azure module apparently was not designed to handle this. Now let’s start creating that JSON. The New-WAPVMRoleParameterObject function handles what would normally be done by the view definition wizard in the tenant portal. 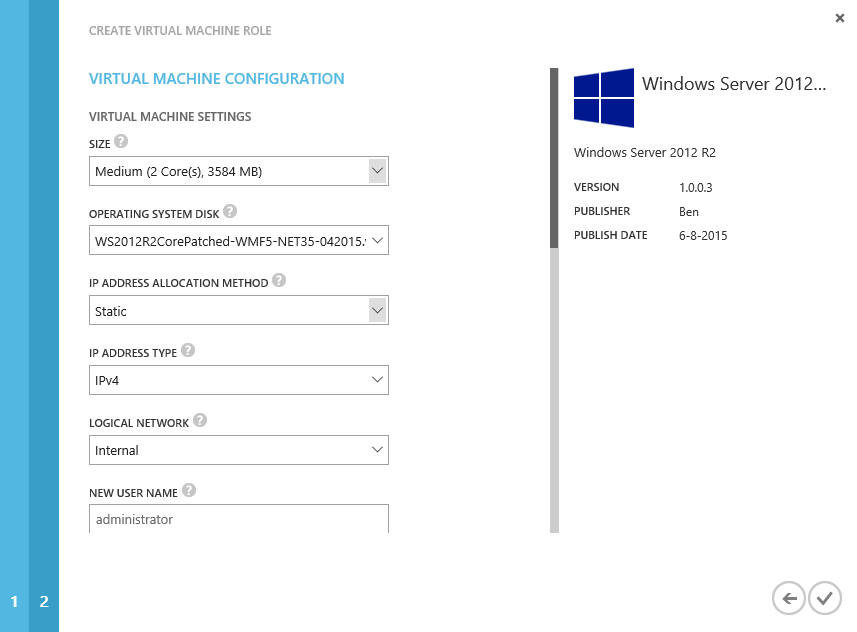 First look at the help for the function.

As you can see this function has the -Interactive switch parameter. When you deal with a VM Role for the first time, you probably want to run it in the Interactive mode as it will prompt you to fill in certain types of values and provide you with default selections for option parameters. To better show this, look at the screenshot below.

You provide the function with all objects it requires which were gathered before:

Also specified is the VM Role VM Size from which the value is taken from a validation set.

Then, because we specified the -Interactive switch, the function starts to prompt you for missing information. Properties which require credentials for example will ask you to enter credentials in a certain format. The input is checked for proper formatting (domain\Username:Password or Username:Password) and if it would be invalid, the user would be prompted again.

To give you a visual reference, in the tenant portal it would like this: 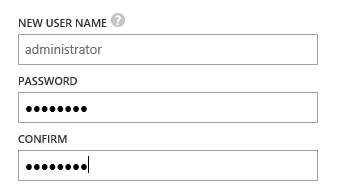 If properties are of the “option” type, the default value will be offered as default and the option values will be enumerated so the user can type in a correct value (which is checked to be valid).

To give you a visual reference, in the tenant portal a property of the type option would like this:

(Note: Because the VM Role Gallery Item is very flexible in the way it can be constructed; this function probably does not deal with every possible scenario. If you find your VM Role can’t be deployed with this module, the cause probably lies in the New-WAPVMRoleParameterObject function. If this is that case, please log a detailed incident on [GitHub][2] or fork the project and do a pull request of the modified code.)

Now if we run this function without the -Interactive switch you will see we have a few blanks.

These are left with a $null value as we have no way to know what should be in them up front. The values have to be provided after the object is generated. This mode is of course the mode you want to use when you know what the VM Role properties need to be and deploy the VM Role using a script, SMA runbook or through the use of a DSC resource for example.

Finally, we can monitor for the deployment to finish using Get-WAPCloudService.

In the next article, I will show some of the inner workings of the module so you have a better understanding of what is going on.