DevOps, Infrastructure as Code, and PowerShell DSC: The Introduction

DevOps is the new cool thing (at least in the Windows world) everyone is talking about and the IT professionals (some of us at least) just give a blank stare every time the DevOps discussion comes up. We feel completely out of place. IT professionals are a part of the DevOps practices and not outside of it. With the rise of web-scale infrastructures, it is important for IT organizations to be more agile and efficient to support the ever growing need for flexible infrastructures than a normal IT professional would have ever imagined. This article series intends to shed some light on DevOps and what it really means for the IT professionals like you and me, and finally explains how and where PowerShell Desired State Configuration plays a role. Let us start with the most trusted definition of DevOps:

DevOps (a clipped compound of development and operations) is a culture, movement or practice that emphasizes the collaboration and communication of both software developers and other information-technology (IT) professionals while automating the process of software delivery and infrastructure changes. It aims at establishing a culture and environment where building, testing, and releasing software, can happen rapidly, frequently, and more reliably.

Let us keep the collaboration and communication part of this definition out of our discussion here. It is more of a soft-skill and a practice that should be nurtured between the development and operations teams. There are even tools that enforce this communication and collaboration. Let us focus on later parts the DevOps definition that is about automating the process of software delivery and infrastructure changes and building, testing, and releasing software rapidly, frequently, and more reliably. A picture is worth a thousand words. So, here is the technical part of the DevOps definition in a picture! 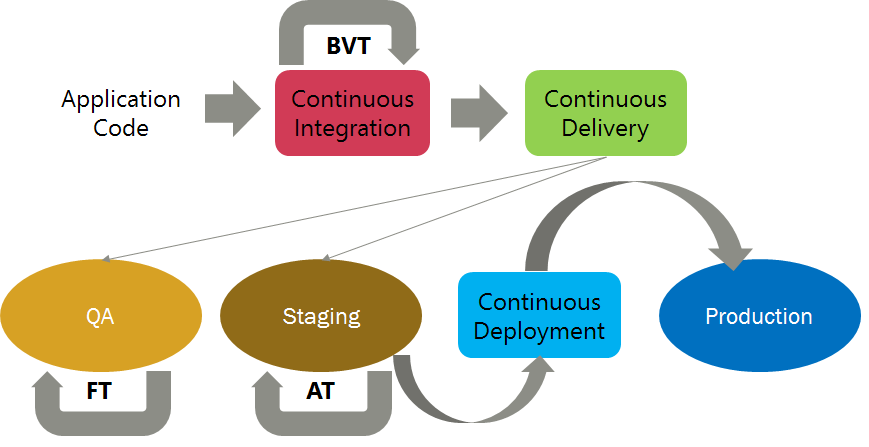 While delivering and deploying the application code in a rapid and efficient manner is important, it is equally important to ensure that the infrastructure where this code gets deployed is dealt the same way we deal with the application code. For reusable, consistent, and rapid deployments of infrastructure, you need automation. When you have automation, you always want to validate what you are doing because there are no humans sitting and watching the deployment as it happens or to click buttons to complete the deployment. And, finally, when something goes wrong, you want to quickly see what changed in your infrastructure automation and rollback those changes when needed.

This is where infrastructure as code comes into picture! 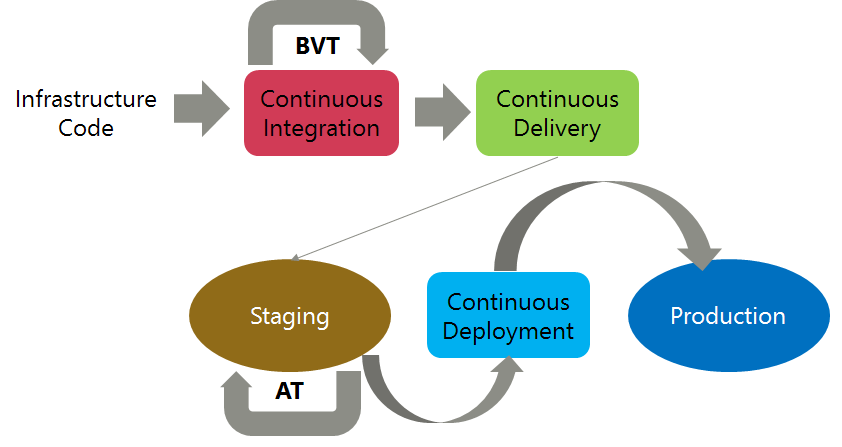 The three major components of infrastructure as code are:

Since the first two parts of infrastructure as code are already discussed in other article series here on PowerShell Magazine, I will only focus on infrastructure blueprints that enable consistent, reusable, and rapid deployment and what role PowerShell DSC plays in this space. When I say consistent, I don’t mean that the host names and IP addresses should be the same. Rather, the configuration aspects that impact the application behavior should be the same. This can only be achieved if there is a reusable method to repeatedly deploy this infrastructure in any environment – be it Development, QA, Staging, or Production. You need the ability to separate your environmental configuration from the resource configuration to be able to create a reusable deployment method that works across different environments. For example, the IP addresses and hostnames will be different within each environment. The number of frontend VMs that you would run in a staging environment would be different than the number of VMs in production. Once this level of separation is available, you can create a single blueprint for your infrastructure and then reuse it in any environment just by specifying the right environmental configuration. This is where Puppet, Chef, PowerShell DSC, and other configuration management solutions play a role.